It was on a very grey dull Monday morning that I said farewell to my dear friend Mathias and his family as I left Paris. The original plan was to head towards Saint Feyre to do some voluntary work at a centre for people with disabilities, however, I decided to take the more scenic route and ended up going through the Loire Valley. Its an area I always wanted to visit since I was sixteen. This may seem silly, but I’d seen some photos in a glossy holiday brochure. You know the kind with lots of happy looking families with bright, white teeth, enjoying scenic cycle rides visiting Chateaux. In my efforts to copy what I thought was the norm, I decided that I too would like to go on a French summer holiday and arranged to travel with a friend of mine and managed to save some money from my summer job at Dickens & Jones, a respectable department store on Regent’s street in London’s West-end. As it was our first holiday without any adults, some friends very kindly helped us prepare and brush up on our French. It was going to be a very exciting adventure ! 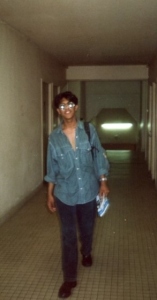 Although we managed to get to France, we didn’t quite make it any further than Paris. Unfortunately, our luggage went to Zurich, so we were without clothes  in the middle of blazing hot summer, which was not fun. After about a week, we nearly ran out of money as my cash card refused to work in French machines and got swallowed up , which wasn’t very nice, and we hadn’t bothered to purchase any travel insurance either – bad mistake!! Anyhow, we economised by walking everywhere and managed to meet a couple of lovely French girls, which helped to ease the situation, however, by the end of the week we finally decided we’d had enough and absconded from a very cheap grimy hotel in Montmarte. We were extremely naughty and literally chucked our luggage out of the window about an hour or so after we had already checked in. We decided that if we’d stayed the night we would have been completely broke before our return journey, but didn’t have the courage to negotiate with the hotel. Unfortunately, because it was peak season and the coaches were full ,we actually ended up spending the night outside the Paris coach station.I don’think either of us got much sleep that night.Anyway, so that’s why I ended up on a detour through Blois. After finding a nice little spot for lunch I meandered my way through the chateaux region, on some very rural roads where there was rarely a car in sight. I lost count of the number of times I heard those dreaded three words “GPS signal lost” especially at the most crucial moments when you needed it most. Luckily for me my map reading and navigation skills came in handy as I somehow managed to get to my destination.

When I finally arrived that night near Saint Feyre, I received a message from the manager of the centre I was due to visit the following day. He explained that he’d already managed to recruit sufficient numbers of volunteers , who spoke better French than me of course, and therefore my services were no longer required. While I have to confess that I was a little disappointed, I understood his reasons and instead decided to go and visit an old flame who lived in the area called Mathilde and her son, Ben, who live closeby in Champeix , in the Puy de Dome district (named after a famous local Volcano) situated in the Auvergne region.

Champeix is a pretty little town which, which looks a little run down but feels like you’ve gone back in time. Children who pass you on the street still greet strangers ‘Bonjour Monsieur’ in a lovely lyrical tone and everyone seemed very courteous and helpful. Its also an area of outstanding natural beauty , possibly due to the volcanic activity in the past.

I was particularly interested to visit a little candle shop belonging to Mathilde, or ‘Mme Candles’ as my dear friend, Richard, likes to call her. Actually Mathilde isn’t even her real name, but the stage name she was using when we first met in London.

For those of you who’ve been following my blog, you may have already worked out that this is the same Mathilde I once had a ‘thing’ with. I call it a ‘thing’ because I’m not quite sure what ‘it’ actually is. The fact that Mathilde was the first girl I ever fell in love with some twenty odd years ago could have something to do with it, but we’re not actually in love with each other any more. Mind you as love stories go, it was a lovely romantic story and maybe one day some clever Hollywood/Bollywood director will decide to make a film about it after I die, once I actually finish polishing my script of course, which as Mathilde keeps reminding me is a long overdue promise I made many years ago. Her own French version was actually published earlier this year. About a month or so ago, for the first time we each read our own versions to the other on Skype, which felt a bit weird but it was cute. I personally think that mine is much better as Mathilde has a terrible memory, which she will admit to herself, and my descriptive detail adds a certain richness to the tale, but she feels her ending is much better than mine. I guess I will leave you to  judge for yourselves, that’s if you’re interested in hearing the story of course.

So, when I telephoned Mathilde to let her know I was in the area earlier than expected, rather than agreeing to drop everything at a moment’s notice, which of course is what I would have done if she came to visit me all the way from France, Mathilde explained in her best French/Cockney accent that “eeet would be eem-possible” because she was extremely busy with her shop  as Christmas is her peak period and she has to prepare for Christmas markets. Great ! So instead I arranged to meet up with her son, Ben,  at a local Pizzeria. I’ve known Ben since he was approximately 8 years old and we  meet up whenever I am in town either in France or England , either with or without his mum. He is one of those bright, intelligent, well mannered 18 year olds, who seems to be curious about everyone and everything and has charm as well as an ‘old head on young shoulders’, which I hope will help him navigate through the crazy maze of life. Ben, who is currently working as a Trainee Graphic designer for the local Mayor’s office, is also a very talented up and coming singer & song writer. This is a link to a song he wrote himself. Thought some of you may enjoy it ! 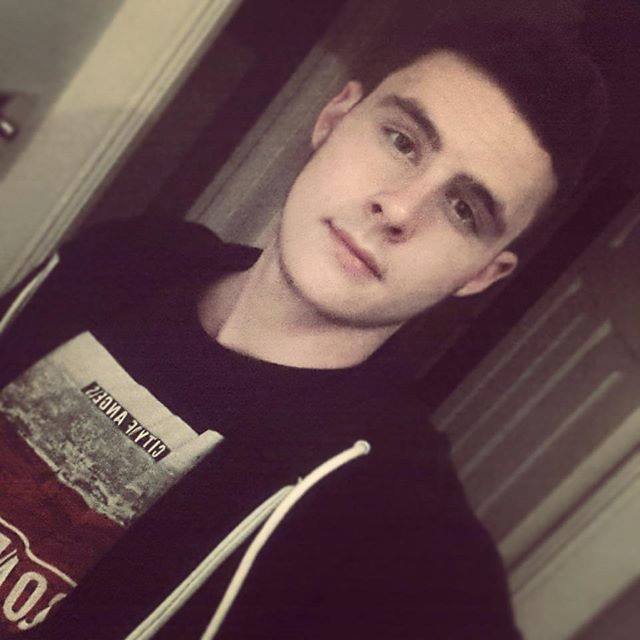 When we meet, Ben apologises for his mother’s absence and explains that his mother has recently started dating a new man, a florist, which I think is kind of cute – The Florist and The Candle maker:).. Mathilde, like some romantics I know, tends to disappear from the planet when she first falls into love with a new man, which as she explains ‘eees the best bit‘. The following day I receive a message from a very embarrassed Mathilde inviting me round for tea at her candle shop. After having a dig at her about the previous night, although I suspect that young Ben has probably had words with her already, I agree to meet up. So as the local town clock bells chime  3’oclock I arrive at ‘Mathilde et Zoe’s‘, which is neatly tucked away on a side street (its the corner building on the right just over the bridge) 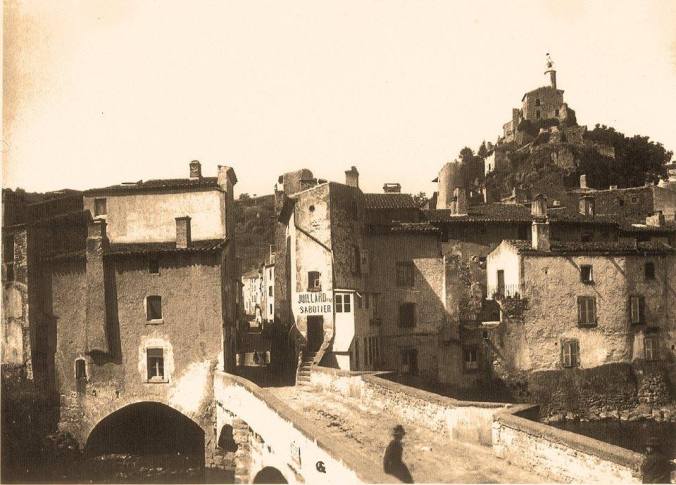 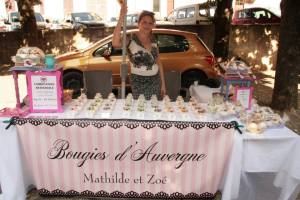 Mathilde hasn’t really changed, but I notice her smile is not quite the same and she’s clearly been working very hard. Mathilde serves up one of her delicious teas and muffins, freshly delivered by a local baker who pops in after I arrive. As always we just chill out, have a few laughs and spend time catching up about her life and Ben’s. Like mothers of most teenagers, she shares her concerns about his future and moans that he doesn’t clean up after himself (sorry Ben !). As this is my first visit, I  get the full guided tour as Mathilde demonstrates her beautiful smelling candles. For those of you interested in artisan sensual aromatic candles made with natural oils , here is a link to her website:

Mathilde mentions that she’s now thinking about moving to the nether regions of Norway, where she will continue to run her international candle business. We laugh about how she would manage as she’s never ever learnt how to drive. Her reply is that she will find it much easier with a sleigh and dogs, which of course only works if you have snow all year round !! I realise that this is one of Mathilde’s fantasies, the like of which I’ve heard a million times before, usually when she is bored and ready to move on. Like me, she is a bit of a gypsy and the last time we had a similar discussion was in Paris when Mathilde, a naturally born performer (singer/actress/ comdedienne) who started her career at a very young age, finally decided to throw in the towel on her stage career and to move to Auvergne instead. As always I decide to share her dream in the hope that it brings her the happiness and fulfillment she’s always craved. The shop starts to get busy and I explain that I should go. I try to sneak away saying ‘au revoir’ while leaving with some of her candles, but she follows me outside. Like ships that sail in the night we slowly drift apart on our individual journeys to separate destinations as gently and easily as we came together, not knowing when or where we will ever meet each other again. I guess only time will tell. Bon chance Mathilde !

Next stop: Ferney-Voltaire , in The Jura hills (Near Geneva)

If you’ve enjoyed  reading my blog, please remember that the purpose of this journey is to raise funds for people with Parkinson’s. So please don’t forget to donate. Every little helps and its easy as all you need to do, is click on the link below.  Debit/ Credit cards of all countries/major currencies are accepted

Many thanks for your ongoing support.

2 thoughts on “Travelling through France”

This site uses Akismet to reduce spam. Learn how your comment data is processed.